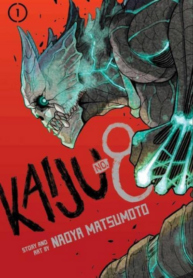 Following a chain of unfortunate events and an interaction with an ambitious recruit named Leno Ichikawa, Kafka encounters a parasite-type kaijuu that forces its way in through his mouth—turning him into a humanoid monster. With his newfound powers, Kafka aims to give his lifelong dream a final try.